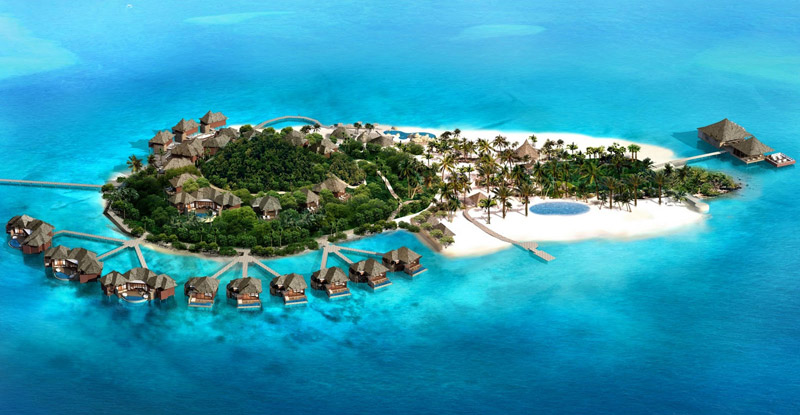 From $650USD/PP
Country:Cambodia
Tour Type:Private Tour Package
Start:Siem Reap, Cambodia
Finish:Phnom Penh, Cambodia
Enquire Now
The journey of 10 days offers you all the excitement and culture of Cambodia. Aside from the capital Phnom Penh and the world-famous temple complex at Angkor Wat - Angkor Thom and enjoy the beautiful beach on Koh Rong island.

Welcome to Cambodia! Upon your arrival in Siem Reap, you will be greeted by the tour guide and escort you to your hotel, where you will have time to settle in and relax. In the evening, enjoy welcome dinner at the local restaurant with Apsara dance show.

Today, you have a full day to discover Angkor Complex. Start the trip in the morning with Angkor Thom complex. You visit the South Gate (with its huge statues depicting the churning of the ocean of milk), the ancient capital of Angkor Thom (12th century), Bayon Temple (unique for its 54 towers decorated with over 200 smiling faces of Avolokitesvara), the Royal Enclosure, Phimeanakas, the Elephants Terrace and the Terrace of the Leper King.

In the afternoon, visit Ta Prohm Temple, originally called Rajavihara. Unlike most Angkorian temples, Ta Prohm has been left in much the same condition in which it was found. The photogenic and atmospheric combination of trees growing out of the ruins and the jungle surrounding have made it one of Angkor's most popular temple, created in 1186 AD by King Jayavarman VII. After shooting the film there, the name now called Lara craft or Tomb Raider, Then visit Angkor Wat, the most disinterested, the most perfect Khmer temple. Its distinctive five towers are celebrated on the Cambodian flag and the 12th century masterpiece is considered by art historians to be the prime example of classical Khmer art and architecture. Angkor Wat's five towers symbolize Meru's five peaks - the enclosing wall represents the mountains at the edge of the world and the surrounding moat, the ocean beyond. Overnight in Siem Reap.

Today you will have the new experience to ride the Ox cart from the village to Bakong School, where you will see very nice view of the rice field paddy at the local village. After that, drive about 15 km to the southeast of Siem Reap city to Rolous group. It is a group of monuments representing the remains of Hariharalaya - the first major capital of the Angkor era, Khmer Empire and the Preah Ko. It dedicates to the ancestor for predecessor Bakong, mountain temple of Capital, Hariharalaya and the Lolei temple set in the middle of reservoir or Baray Indratataka (about 3 km length by 800 m width).

In the afternoon, visit Banteay Srey "The Citadel of women". On the way, you have chance to stop to see the local procession of boiling the fresh Sugar Palm Juice. Contiune the tour to Banteay Samre temples - built in the third quarter of the 12th century. It consists of a central temple with four wings preceded by a hall and accompanied by two libraries, the southern example remarkably well preserved. Two concentric walls enclose the ensemble.

Today, you have chance to visit the community of fishery village, southern downtown of Siem reap (15 km from Siem Reap). It's time to take an excursion in a traditional wooden boat to Tonle Sap Lake, the "Great Lake" of Cambodia (one of the wonders of Asia), and go through each floating villages, and ready to shoot the picture of  the floating grocery store, or barber store , battery recharge station. Before reaching inside the community and you will meet floating vendors store with many small gear boat following the tourist boat for catch up the business by selling cold beer or cold water. After that, visit Les Artisant D’ Angkor, it produced more opportunities to young people in their native villages and provide them with a vocation and a role in society. You will visit the artisans and their craft, the training skills and professional workshops, and their collection from traditional lines to very latest designs connecting Khmer traditions to improvement. You also visit the old market  called “ Phsa Chass “ before coming back to your hotel.

Enjoy breakfast at the hotel and then transfer to the airport for flight to Sihanouk. Upon arrival, you will take joining boat to Koh Rong. Arrive in Koh Rong, check in and free time.

You have free time in Koh Rong today.

Today, you visit the Royal Palace, built by King Norodom in 1866 on the site of the old town, and the Silver Pagoda. Located within the grounds of the Royal Palace, the Silver Pagoda is so named because of its floor, which is made up of 5000 silver tiles. The resources found inside include a solid gold Buddha covered and weighting 90 kilograms and a small 17th century emerald and baccarat crystal Buddha.

In the afternoon, visit Notorious Tuol Sleng Museum. In 1975 Tuol Svay Prey High School was taken over by Pol Pot's security forces and turned into a prison known as Security Prison 21 (S-21). Then Wat Phnom (Central of the City), a treasured place of respect for all Cambodian and is the namesake of the capital. The original pagoda was built in 1373 with four Buddha statues said to have been deposited by the Mekong River. You also visit Russian Market called "Psha Toul Tom Poung" before coming back to your hotel. Overnight in Phnom Penh.

You have free time until be transferred to the airport for your departure flight. End of the tour. Thank you for using our service. 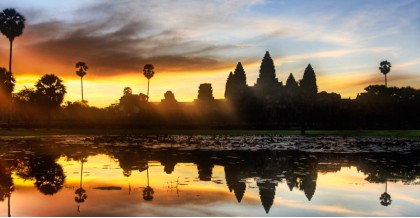 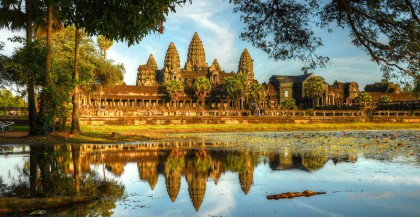