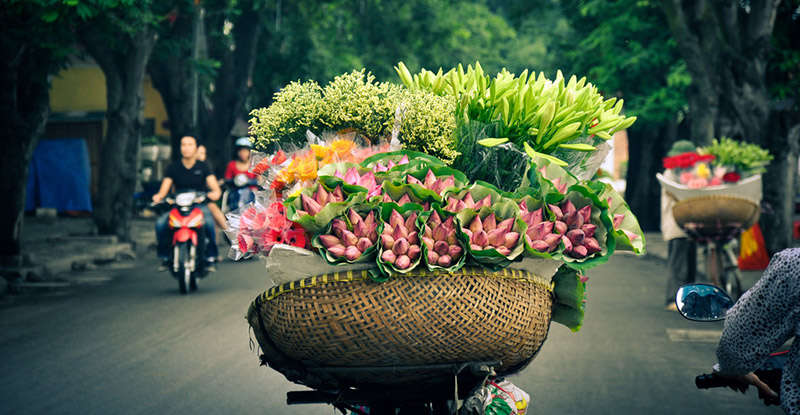 From $899USD/per person
Tour Type:Private Tour
Your Guide:English Speaking
Country:Vietnam, Cambodia
Start:Hanoi, Vietnam
Finish:Siem Reap, Cambodia
Get a free quote
This 7 day journey from Hanoi to Siem Reap will show you the most highlights of Norhthern Vietnam and the magnificent Angkor Complex. Explorer the cultural and historical sites in Hanoi, visit the Natural World Heritage in Halong bay and end of the trip with the majestic Temples of Angkor.

Warmly welcome at Noi Bai airport - Hanoi. Brief itinerary and transfer to city centre. After a short break, you will visit Temple of Literature - Vietnam’s first university established during the construction of the capital. The university functioned for an incredible 700 years and its gardens and well-preserved architecture offer a fascinating glimpse into Vietnam’s past. Continue to picturesque West Lake and the sixth century Tran Quoc Buddhist Pagoda. In the afternoon, explore the old quarter of Hanoi and attend water puppet show - one of Vietnamese traditional art performance. Enjoy welcome dinner at the local restaurant.

Enjoy an early morning swim (during the summer), followed by breakfast as you cruise through more spectacular scenery. The cruise arrives at the harbor by noon. The driver will pick you up and then transfer back to Hanoi.

Early depart from Hanoi and head south for two hour drive to Hoa Lu. You will visit the 1000 year old temples of the Le and Dinh dynasties. The first is dedicated to Dinh Tien Hoang (also known as Dinh Bo Linh), an Emperor from the Dinh Dynasty. The second commemorates the rulers of the Le Dynasty. Dinh Bo Linh successfully conquered Vietnam’s first independent rulers, the Ngo Dynasty. On his death in 980, General Le Hoan wisely married Dinh’s widow and established the Le Dynasty and enlarged the citadel. ). You can spend your time (about a half - hour) in walking up one of the surrounding limestone karst hills, the climb is rewarding with spectacular views.

You then move to Tam Coc for lunch. On the way, you can stop where  you wish to take photographs of local villages and the stunning landscape. After lunch, you embark on a sampan trip along the river to discover Tam Coc, known as “ Halong bay on land”. Tam Coc are three limestone caves stretching along Ngo Dong River. The boat trip is a nice journey along the river with peaceful scenery of Limestone Mountains, rice paddy and the site of some temples along the way from Hang Ca (first cave) to Hang Hai (second cave) and Hang Ba (third cave). You leave Tam Coc and return back Hanoi in the late afternoon.

Today you will catch flight to Siem Reap. Pick up from the airport and transfer to the city centre. After a short break, start your tour to the incredible temple Ta Prohm. There are enormous fig trees and gigantic creepers which embrace themselves in the stone foundations of the structure giving the impression of man's creation being reclaimed by the powerful forces of nature. You also explore the grand circuit with Preah Khan, Kravan, Neak Pean, Krol Ko, Ta Som, East Mebon and Pre Rup Temples, where you can enjoy the sunset. Enjoy dinner with Apsara dance show at the local restaurant.

Following the breakfast at your hotel, you have a full day to explore the wondrous ancient ruins with the South Gate of Angkor Thom, which is famous for its series of colossal human faces carved in stone, the impressive Bayon Temple, the Royal Enclosure, Phimeanakas, the Elephant Terrace, the Terrace of the Leper King and the largest as well as the most complete temple of Angkor Wat. This architectural masterpiece was constructed in the 12th century and covers an area of about 210 hectares. You stroll around this massive edifice, seeing the many galleries with columns, libraries, pavilions, courtyards and ponds full of water reflecting the towering temple.

Breakfast at the hotel and then drive to Choueng Kneas village, where you will take the boat to visit the way of Cambodian poor people life along with schools, restaurants, hospitals and much more floating on the great lake of Tonle sap. Transfer to the airport for the flight departure. 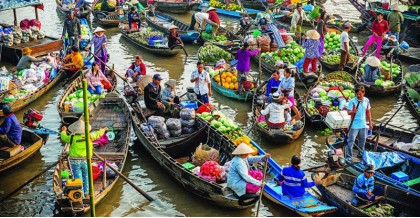 The Mekong river is the longest river in the southeastern Asia region, runs through China, Myanmar, Thailand, Laos, Cambodia and Vietnam. This tour takes you into the heart o.. 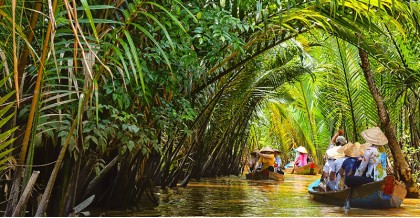 This trip is combination between the highlights of two countries, Vietnam and Cambodia. Start from the hustle and bustle of Saigon, the legendary Cu Chi tunnels to the vibran..