Best of Cambodia and Laos

Best of Cambodia and Laos - 8 Days 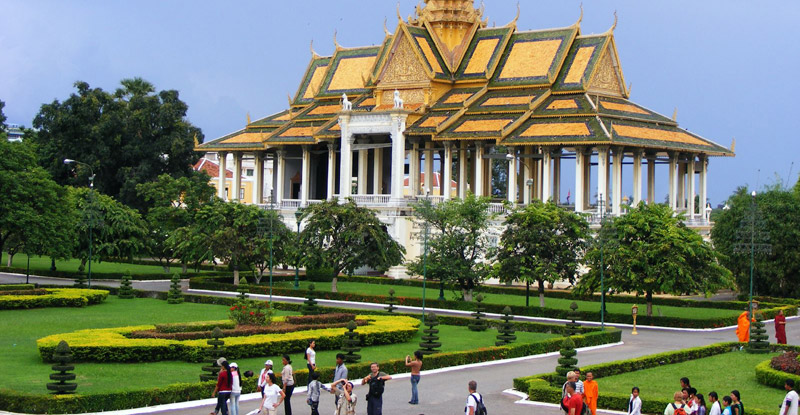 From $950USD/PP
Country:Cambodia, Laos
Tour Type:Private Tour Package
Start:Phnom Penh, Cambodia
Finish:Vientiane, Laos
Enquire Now
The journey of 8 days takes you to the best of Cambodia and Laos. The trip start from Phnom Penh - the capital of Cambodia and to Siem Reap, with the magnificent famous Angkor temples. From here, you will fly to Luang Prabang - the charming former capital of Laos on. The trip will ends in Vientiane, the fascinating capital of Laos.

Welcome to Phnom Penh - The capital of Cambodia. The city is considered as the pearl of Indochina, still reserve lots of French old building. With your professional guide and private car you start to visit Phnom Penh. You will first go to the Royal Palace and the Silver Pagoda. The Palace is a magnificent example of Khmer architecture, it was built in 1866. You will see the Throne Hall and the Napoleon III Pavilion. Silver Pagoda is one of the richest shrines in the world. The floor is made of 5.000 silver tiles. Continue the trip with the National Museum, a Khmer red pavilion, which is dedicated to Khmer art and sculpture. The majority are from the Angkor period (9th to 15th century), and some from the 4th century. Enjoy dinner at the local restaurant before coming to your hotel.

Enjoy breakfast at the hotel and then drive to Toul Sleng museum (S-21) and the killing field of Choueng Ek, which is about 35kim away from the city. These places are grim reminders of Cambodia's bloody past under Pol Pot. It is almost inconceivable to confront the nature of true evil here in this gentle land, but the Buddhist memorial at Choeung Ek, commemorates the 1.7 million victims of the 1975-79 Pol Pot regime. This excursion may prove distressing for some. Return to the city for a short flight to Siem Reap. Upon arrival in Siem Reap, pick up and transfer to your hotel. Drive to southern down of Siem Reap around 15 km from Siem Reap for an excursion to the floating village on the Tonle Sap lake, the “Great lake” of Cambodia. With traditional wooden boat, you pass by floating villages with friendly children in small boats and fishermen at work. The village moves with the water level and during wet season houses are anchored around an island pagoda.

Leave Siem Reap to catch flight to Luang Prabang - the royal capital of the former Lane Xang Kingdom, with its gleaming temple roofs, colonial architecture and stunning mountain backdrop retains a unique charm rarely found in all Asia. Here is plenty to see, some of which are the impressive stupa of Wat Visoun, the shrine of Wat Aham and Wat Mai with five tiered roofs. You include these sights in a half day guided tour, which ends with a climb to Phousi Hill to enjoy a beautiful sunset view of the city and its glowing reflection on the Mekong River. There are 329 steps leading you on zigzag way past various temples to the sacred, gilded stupa of Wat Phousi at the summit.

This morning, you continue to explore Luang Prabang with the temple of Wat Xieng Thong, a magnificent piece of architecture, which nestles at the meeting of the Mekong and the Nam Khan River. The temple structures are decorated in various ways with gilded stuccoes as well as doorways and the main sim has a marvelous 'tree life' mosaic pattern on an outer wall.

After that, you take a drive 30km to visit Tad Kuang Sii waterfall.  The falls cascade over many calcified tiers and down several hundred feet into a series of cool, turquoise pools. The water here has a clear blue-green tint due to the high mineral content.  You can climb the stairs and look down from various high viewpoints on the way to the top! Enjoy a picnic lunch and later in the afternoon return to the hotel to relax or explore on your own. Luang Prabang is a wonderful walking town, and you can find dinner on your own at any number of fine international restaurants.

An optional early start gives you the fantastic opportunity to participate in the daily morning rituals of saffron-clad monks collecting offerings of Alms (ubiquitous sticky rice) from the faithful residents. This tradition is very unique in Laos, being the only Buddhist nation still preserving the procession.

Leave Luang Prabang for Vientiane by a short flight. Tour briefing and transfer to city centre. You have a guided day tour of the capital; including the oldest Wat Sisaket, the temple with thousands of miniature Buddha statues and the former royal temple of Wat Prakeo, which previously housed the famous Emerald Buddha Image. On the way to Lao’s national precious heritage, the famous and sacred structure of That Luang Stupa, you stop enroute to take some pictures of the imposing Patuxay Monument, which is well known as Vientiane’s own Arc de Triumph. Enjoying a spectacular view of over the Mekong River at sunset is a perfect way to finish the day. 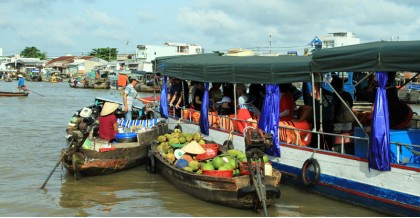 Highlights of Vietnam, Cambodia and Laos

This tour is designed for travellers desiring to discover World Heritage Sites in Vietnam, Cambodia and Laos. 14 days of the trip is chance for you to visit World Heritage si.. 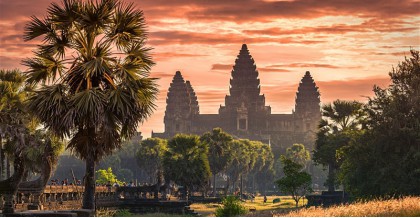 A Glimpse of Indochina Tour

Starting from Hanoi through Vietnam, Laos and Cambodia in 9 days discover the highlights of Indochina countries: the French-colonial heritage, wonderful Halong bay in Vietnam..